I’ve tasted Colman’s Instant Beef Gravy… should you put it in the trolley or leave it on the shelf?

A blue chip design and a big money advertising campaign! Colman’s of Norwich or Unilever have certainly put their dosh where their gravy paste is. Creative colourful tube! A front label boasts that it’s instant beef gravy with real meat juices! Its crisp clear wording asserts that the product has no artificial flavours; no artificial colours or preservatives and it makes 5 servings.  There’s obviously a lot of ‘gravy’ to be made on the gravy shelves.

So let’s take a look and see how they make this gravy! Great design and advertising are very important for the first purchase, but the repeat business is down to shopper.  And gravy producers know that’s where the real ‘gravy’ is.

How does Colman’s Instant Gravy compare with Bisto’s  – the market leader on the gravy shelves?

Both are not suitable for vegans & vegetarians.

Bisto displays its nutritional values per 100g as sold.

Colman’s displays its nutritional values per 100ml as prepared.

So we can compare:

Let’s do the maths and convert Colman’s nutritional values to 100g as sold.

To convert to Colman’s nutritional values below to 100g as sold multiply by 9.615.

Now check out the nutritional values for Colman’s and Bisto on the Can I Eat It? app display below.  You’ll see that Colman’s has a shedload more sugar and salt! 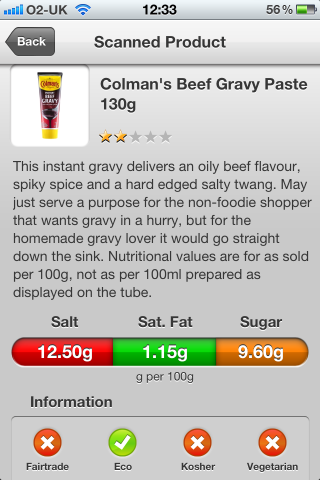 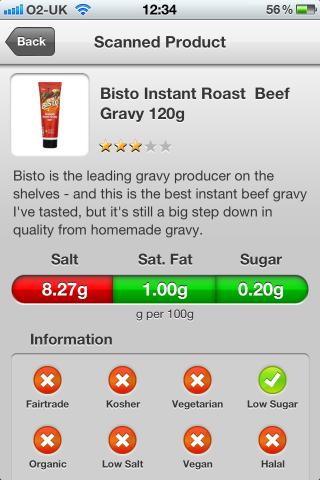