Unlike Ireland, where there is three year apprenticeship to be barperson, most of the part-time staff that work behind the bar of our British pubs, have very little knowledge of the spirits that they sell from the back shelf.

Surely, it’s time that publicans trained all their staff in the nuances of spirits rather than just making sure that they can pull a pint and work the till!  Until it’s mandatory for bar owners to train all their staff in all the drinks they serve –  I recommend that spirits drinkers should imagine there’s Caveat Emptor sign hanging from the shelves. For example, I’ve lost count how many times I’ve asked for a bourbon whiskey and the barperson has reached for the Jack Daniel’s bottle! It’s a common mistake: JD is actually a Tennessee whiskey, while bourbon is synonymous with Kentucky – all but a couple of brands of bourbon are made there, and Kentucky is the only state allowed to put its name on the bottle.

Apart from that, though, is there any difference between the production of Jack Daniel’s and its whiskey neighbours to the north? Well, only JD is charcoal filtered, which is supposed to alter both the aroma and flavour spectrum. Judging from many bourbon tastings and many others, there is more difference in smell and taste between two bourbons like Woodford Reserve and Maker’s Mark than between Jack Daniel’s and your average bourbon. As is the case with Scotland’s whiskies, the ‘house style’ of the distillery has a much more important influence on the eventual flavour.

After 30 years of prohibition in Kentucky, the booze industry had all but collapsed. Before, there had been around 2,000 distilleries; today there are less than thirteen. Their main big brands being: Jim Bean, Booker’s, Bulleit, Knob Creek, Maker’s Mark, Woodford Reserve, Wild Turkey and Four Roses.

After prohibition, to kick-start the barrel-making industry, a law was passed that all whiskey had to be matured in new American oak barrels. This imparts to the spirit the full force of new oak, those assertive coconut and creamy vanilla flavours that explain why so many of today’s drinkers prefer it mellowed with a mixer.

The law also meant there was a superfluity of second-hand barrels, which our own whisky industry was very happy to make use of. The bourbon distillers like to claim it’s the flavour from their whiskey that makes ours so good. I’m not so sure about that! 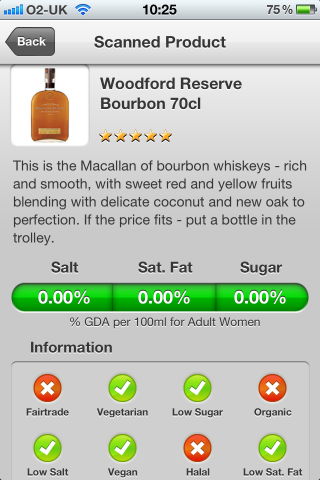 Download ‘Can I Eat It?” UK iPhone App and tap in the barcode

Barcode: 5010196091534
Jim Beam Black Label Bourbon Whiskey
A real knockout if you enjoy a flavoursome spirit. A blast of coconut, red fruits and new oak hits the nose with a Muhammad Ali-like punch. It’s a smooth sip at the lips, but by the swallow the fiery flavours subject the tastebuds to the old one-two. Want a high quality Kentucky Whiskey? Put a bottle in the trolley.

Barcode: 0085246342978
Maker’s Mark Bourbon Whiskey
A palate warmer which charms the tastebuds with a sweeter style of bourbon that, once swallowed, dispatches real heat to the palate, throat and beyond. If the style, size and price fits – put a bottle in the trolley.

Barcode: 080432553190
Wild Turkey 101, 8 Year Old Bourbon Whiskey,Kentucky, USA
A high octane, palate warmer that charms the tastebuds with honey, coconut  and peel fruit notes from sip to swallow. Want a top notch bourbon? If the price fits – put a bottle in the trolley.

Barcode: 5000281019116
Bulleit Bourbon Whiskey, Kentucky, USA
Not as flavoursome as Wild Turkey or as elegant as Woodford Reserve, but it will hit the spot if you are looking for a silky smooth sipping dram.

Barcode: 01042276
Sainsbury’s Bourbon Whiskey, Whisky, Kentucky, USA
Want a cheaper alternative to the leading brands? You’ll hardly notice the difference – if you drink it with a mixer. If the size and price fits – put a bottle in the trolley. Competing Brands: Makers Mark & Wild Turkey

One thought on “Caveat Emptor for Bourbon Drinkers”