By Veggie Tom
These convenient frozen chunks have a moreish texture and absorb sauce flavours easily. But are they still the meat substitute against which all others are judged?

The product:
Quorn and I have an odd relationship. I was a vegetarian before it got popular (I think that makes me a hipster) so when it arrived on the scene to fill various meat-sized gaps on the nation’s plates, I had no gaps to fill. Having never tried meat, this meat-substitute was substituting the unfamiliar, and its strange texture and characterless taste left me cold. But a few years have passed since then…

The verdict:
Time’s been kind to my mycoprotein friend – and these frozen Quorn chunks, aka ‘meat free chicken pieces’, have become a staple in my freezer. What’s changed since that teenage dismissal is that I now live with someone who eats meat, and I can’t tell you how useful this stuff has become for midweek dinners. It still doesn’t taste of much until you’ve soaked it in sauce, but that’s not really the point. It’s quick, convenient, healthy and satisfying, and it’s even nice enough that plenty of omnivores I know are happy to eat it. There’s a reason why this is the meat substitute everyone knows best. 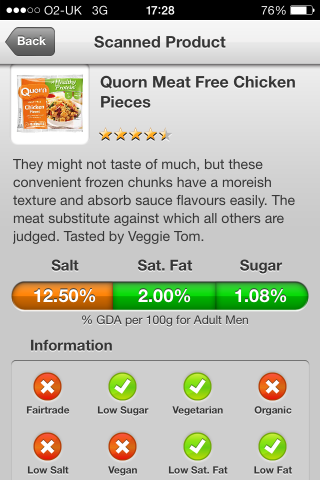 Can you eat it? Contains Eggs. Produced in a factory which handles Milk, Wheat & Gluten. Suitable for Vegetarians.

Barcode: 5019503002133
Quorn Meat Free Chicken Pieces
They might not taste of much, but these convenient frozen chunks have a moreish texture and absorb sauce flavours easily. The meat substitute against which all others are judged. Tasted by Veggie Tom.

Barcode: 5019503011678
Quorn Cheese & Broccoli Escalopes
The taste is OK, but I’ve cooked quite a few of these and the cheesy side has collapsed and fallen off every time. Other than that, a decent veggie bake. Tasted by Veggie Tom.

Barcode: 5019503024982
Quorn Steak Style & Gravy Pies
Is this the best veggie pie on the market? Not really. But it’s frozen, convenient, filling and pretty tasty. Tasted by Veggie Tom.

Barcode: 5019503009644
Quorn Chicken Style Burgers
How to rate these? On their own, they’re pretty tasteless, but in a burger bun with lettuce, mayo, ketchup, pickles and onions, they’re fantastic. In summary: great texture, bring your own flavour. Tasted by Veggie Tom.

Barcode: 5019503020168
Quorn Sausage Rolls – 6pk
The Quorn’s nice but the pastry isn’t. I’m glad these exist but I can’t help wishing they were tastier. Tasted by Veggie Tom.