By Veggie Tom
These corn cakes have a touch more flavour than most rice cakes – and they’re handily packaged in threes to help keep them fresh.

The product:
For dieters, rice cakes are hard to beat – a light disc of puffed rice contains a mere fraction of the calories of a similarly-sized chunk of bread. But they are lacking in flavour. Can corn cakes provide an extra punch?

The verdict:
Don’t expect these to tickle your taste buds – like their rice equivalents, these corn cakes contain fairly bland, puffed grains and lots of air. But there is a toasty note which adds a little something, and Nature’s Store has kept them pretty thin for a nicer mouthfeel. They’re also packaged in threes inside the box, which is a big bonus for freshness. 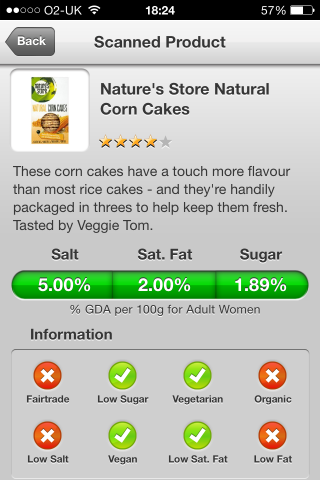 Can you eat it? Veggie, vegan and gluten-free.

Barcode: 5060112547201
Nature’s Store Natural Corn Cakes
These corn cakes have a touch more flavour than most rice cakes – and they’re handily packaged in threes to help keep them fresh. Tasted by Veggie Tom.

Barcode: 5060165540204
Easy Bean Chickpea Crispbread – Seeds & Black Pepper
Want a crispbread with an interesting flavour and a crisp and crumbly texture? These fit the bill – buy them if the price fits. Tasted by Veggie Tom.

Barcode: 25046966
ALDI Cheese Assortment Crackers
These are as good as any of the cream crackers around. Tasted by Martin Isark.